Many choosing to get Johnson & Johnson vaccine after 10-day pause lifted, but vaccinations wane overall 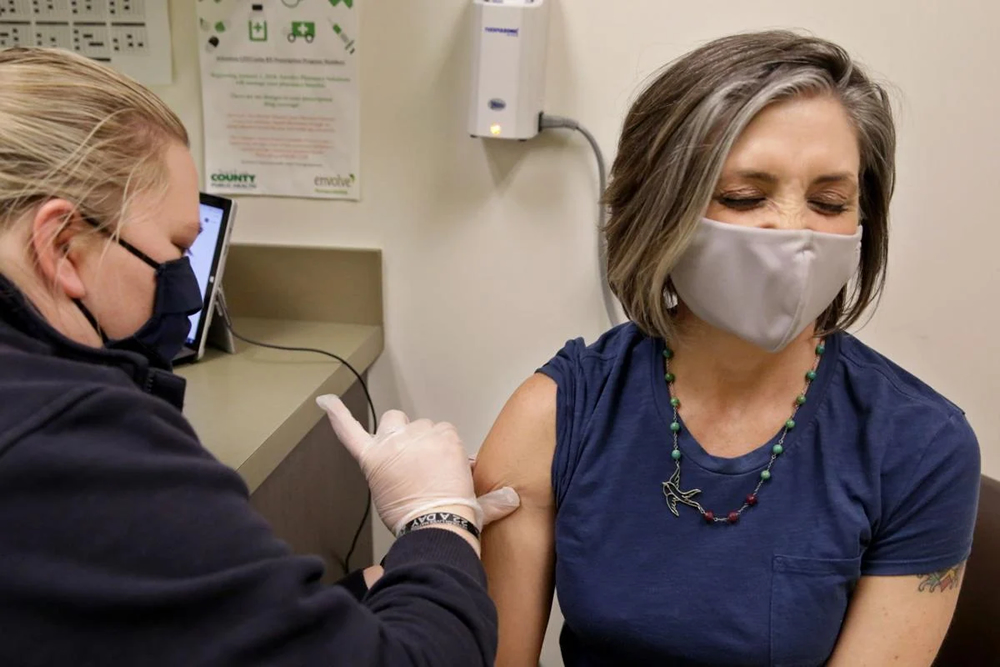 Dellwood Pharmacy had just received 300 doses of the Johnson & Johnson vaccine before federal and state health officials paused its use on April 13 as they investigated rare reports of blood clots in people who had received the vaccine.
After health officials lifted the pause on April 23, the pharmacy on West Florissant Avenue was one of a small number of area locations offering all three types of COVID-19 vaccines to anyone coming into the pharmacy without an appointment.

Owner and pharmacist Rebecca Rebecca Mawuenyega said she was worried the 10-day pause might negatively affect demand for the J&J shot, considered key in the effort to reach herd immunity quickly as it is the only approved COVID-19 vaccine in the U.S. that requires just one dose.

But people continue to choose J&J over the Pfizer and Moderna vaccines, which each require two doses three to four weeks apart.

“When it comes to the Johnson & Johnson, they still wanted it,” Mawuenyega said. “It’s been pretty interesting.”

Some people are afraid of needles and don’t want to face having to get another shot, she said. One woman was 15 weeks pregnant and wanted protection quickly for her and her fetus, as pregnancy can increase risk of COVID-19 complications. Another drove to the pharmacy from a couple hours away and did not want to make the trip again.

The pharmacy also offers vaccinations for the homebound, and those who request that service are asking for J&J so vaccinators do not have to visit their home twice, Mawuenyega said.

A few people have told her they changed their mind about choosing J&J, especially those already at higher risk for blood clots, she said, “but if they preferred it because of convenience and having to travel, they still prefer it.”

Federal health authorities paused use of the vaccine to review six cases of a rare type of blood clot in the veins draining blood from the brain that was coupled with a low blood platelet count. Authorities discovered more cases — for a total of 15 recipients, all women, most younger than 50. Three died.

The suspension ended after health officials decided the vaccine’s benefits far outweighed the extremely small risk. Nearly eight million Americans have received the J&J vaccine. Distribution resumed with a health warning about risk for the clot.

During the pause, many Missouri residents were waiting and ready for it to become available again, said Lisa Cox, spokeswoman for the Missouri Department of Health and Senior Services. And new orders have come in.

Eight providers requested 2,500 doses of J&J this week, Cox said, and more orders are expected in coming days. The Urban League of Metropolitan St. Louis is hosting a vaccination clinic offering the vaccine next week at St. Louis Community College at Forest Park.

“We are pleased to still see demand for the J&J vaccine since the pause was lifted, and even from what we heard anecdotally from around the state during the pause,” Cox said.

With COVID-19 vaccines manufactured by Pfizer and Moderna making up a majority of supply in the U.S., and supply now outpacing demand, people have their choice of vaccines.

“Our advice continues to be the best vaccine is the one you can get the soonest, but we also understand there is greater opportunity for choice now with the greater vaccine availability,” Cox said.

In Missouri, just 105,700 doses of J&J had been administered before the pause. To date, a total of over 3.8 million doses of COVID-19 vaccine have gone into arms, and nearly 1.7 million state residents have completed the vaccination process.

The St. Louis County Department of Public Health had about 1,700 doses of Johnson & Johnson in storage when the pause went into effect, said spokesman Christopher Ave. The city of St. Louis Department of Health just has 150.

Across the state, reports showed 93 providers had nearly 25,000 doses of J&J on hand this week.

The county resumed use of its doses on Wednesday, making appointments for the J&J available at its John C. Murphy Health Center in Berkeley.

The county has also resumed use of the J&J vaccine in its program to vaccinate homebound residents, but it has switched to using the Pfizer vaccine when visiting women younger than 50, Ave said. The program had relied only on the one-dose vaccine.

The same change was made for inmates at the St. Louis County Jail, Ave said. Pfizer doses will now be allocated for female inmates younger than 50.

Ave said that everyone will have their choice of vaccine at any of the county health department clinics and programs.

It’s still too early to tell, he said, how the pause has affected the choice of vaccine, but the J&J vaccine is still leaving the shelves.

“Anecdotally, what I hear is that people only want to have to do it once,” Ave said. “You’re one-and-done with the J&J, which that has always been the main advantage of the Johnson & Johnson vaccine from a public heath perspective.”
Treatment for the clot

One reason for pausing use of Johnson & Johnson vaccine was so doctors could learn how to recognize and properly treat the combination of the blood clot along with low blood platelets. In this case, the typical treatment for the blood clot — the blood thinner heparin — can be dangerous.

“The most important thing is for physicians to be aware of this potential change in how we treat, and that’s one of the benefits of the pause is it’s allowed the information to be disseminated throughout the medical community,” said Dr. Akash Kansagra, a neurosurgeon at Barnes-Jewish Hospital.

Doctors can turn to a long list of effective drugs that can be used in place of heparin to treat the condition, Kansagra said. “There are good treatments available, we just have to know that the drug we use most commonly is perhaps not the best choice and go to our second line of drugs.”

Diagnosing the clot and low platelets can be done with a simple scan and blood test, Kansagra said.

Even though effective treatments are available, early diagnosis is important, he said. Symptoms such as severe headache, abdominal pain, leg pain or shortness of breath should not be ignored.

“If patients have received the vaccine recently and do have symptoms, like the severe headache, especially one that is different from any headache they’ve ever had before, that would be a reason to seek medical help,” Kansagra said.

Mawuenyega said she is concerned the reports of clots from the vaccine has fueled hesitancy and tumbling numbers of people getting any of the three vaccines.

The number of doses administered statewide last week was nearly half the number administered during the week ending April 11, according to a report by the Missouri Hospital Association. Polling data released last week by MHA showed 28% of Missourians had no plans of becoming vaccinated.

“I am worried because a few weeks ago it was very precious item we are all holding in our hands, and just within a week or two, it’s something that could potentially just sit on a shelf,” Mawuenyega said. “It’s a sad situation.”